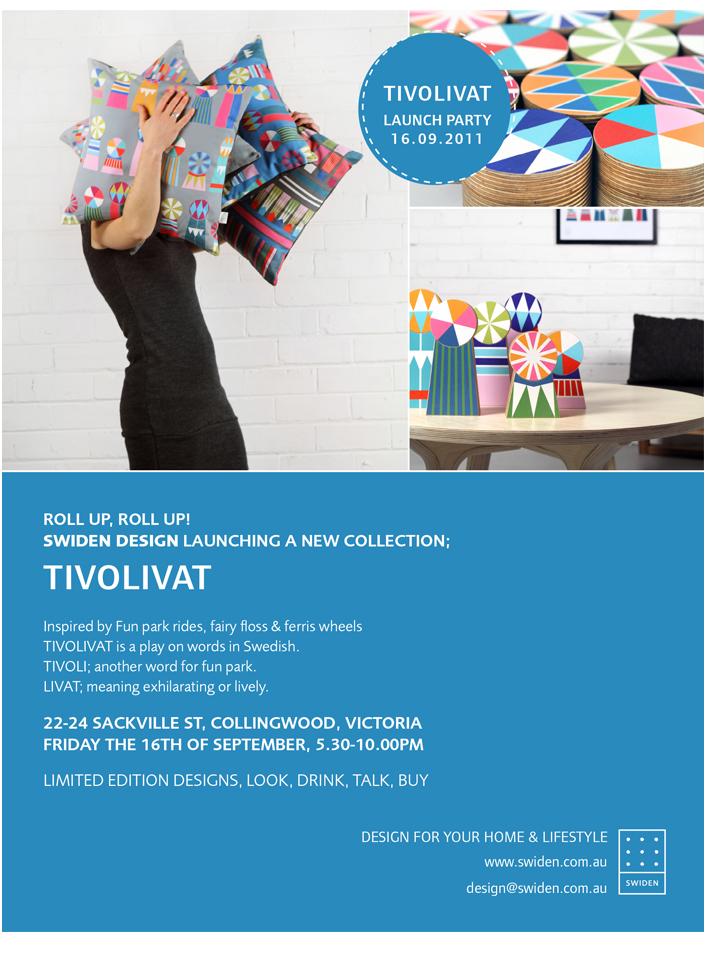 Finally my new collection TIVOLIVAT is ready to be launched.
Come and celebrate with me!

One of my absolute favourite treats is Swedish Cinnamon Scrolls (or Kanelbulle).
As winter hits Melbourne I’m finding more homely things to do and baking is one of them.

When I was a kid I used to come home to the smell of baking and cinnamon, filling the entrance and hallway of our apartment block. I would eat the scrolls served with a glass of cold milk, which I still claim is the best way to enjoy them.

Every Auntie and Nanna in Sweden has their own special Kanelbulle recipe, and here I am, working out my own. I’ve experimented with a few different recipes and also altered them a bit since I came to Australia. My mum sends me “pearled sugar” from Sweden for garnishing,
but they are just as good without. I still use fresh yeast even if it’s a bit tricky to find here.
Usually I get it from a bakery, they are mostly nice and sell you a piece.

This recipe is Sweden’s best kept secret, hope you enjoy!

2. Crumble the yeast into a bowl.

3. Melt the butter on the stove. Add milk to the melted butter and heat to 37°C.
(It’s important that the temperature is as close to 37°C as possible for the yeast
to do its job. I test the temperature with my finger to make sure the liquid is the
same as my body temperature.) Gradually add the 37°C liquid a bit at a time over
the yeast and stir until dissolved.

4. Add sugar, salt and almost all the flour to the bowl
(save some flour for rolling the dough later).
Work the dough smooth until it lets go of the sides of the bowl.

5. Cover the dough with a tea towel for approx 30min to let it rise.
(Don’t peak, you don’t want to disturb the yeasting process.
The dough is also happiest tucked away protected from drafts and cold air.)

6. To make the filling; beat the butter, sugar and cinnamon until smooth.

7. Knead the dough with the remaining flour until smooth.
Roll out the dough on a lightly floured surface to a 30cm x 40cm rectangle of 5mm thickness.

8. Spread the filling evenly over the dough. I tend to get a bit of excess of filling,
put as much as you can on – but don’t drown the dough.
Roll up the dough starting from the long side and using a sharp knife,
slice the dough into 2cm pieces.

9. Place the scroll pieces on to a tray covered with baking paper, cut-side up.
Let the scrolls rest for approx 20min covered with a tea towel to let the yeast
do it’s thing once again.

10. Brush the scrolls with some whipped egg.
Cook on the middle of oven tray at 250°C for 8 minutes or until golden.

11. I eat them as soon as they’ve cooled down enough to not scorch my tongue. Yum!